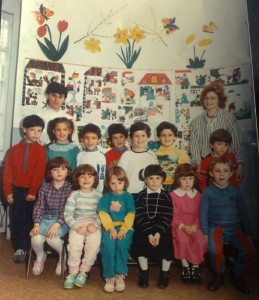 Usually, there were about fifteen of us for lunch at home: my brother’s pals, people who worked for my dad and all sorts of friends.
My poor mum seems to have learnt her lesson well for she now runs a restaurant lost in the middle of our valley, a place where on a quiet day about a hundred people come and eat and where you can’t find a place to park when it is really busy!
My grandfather, a great man who left on his Great Journey ten years ago – who knows where he may be now, perhaps sitting on the edge of the universe, looking at us with a smile – sat at the end of the table watching this hungry crowd devouring tons of food, maybe thinking of the time when he had nothing more than polenta and milk to eat.
At the other end of the table, not quite the silent and lenient type, was my father. By some irony of fate, my dad was a year older than my grandpa and had married a woman thirty years younger than himself.
My father was born eighty-five years ago in a small farmhouse lost in the country, where the floor was bare trodden earth and the roof was made of straw, a place with a wood-burning stove and stone walls to protect himself and his thirteen brothers from the cold. Those were hard times, when kids were sent at the age of four to work for better-off families, like the miller’s family.
That is what happened to my father.
From a servant he then moved on to become a shepherd. From four to eight, he slept with mice in the granary and from eight to sixteen with goats and cows in the woods. Then came the first train and he hopped on it. He rode to the coast with flour bags that he bartered for olive oil, which he eventually went to sell in Genoa. That is how he started his career. During the next ten years he settled in Genoa, became a travelling salesman selling eggs and cheese from door to door before eventually opening a crisp factory. He rapidly made a fortune, bought luxury cars and beautiful mansions on the hills of Genoa, got married and had children.
Then he moved from Genoa to Pontinvrea. Little by little, he purchased two mountains facing each other and in forty years’ time he built two villages with dozens of houses scattered throughout the woods, then roads, springs and aqueducts. He built “his town” where he still lives today with his whole family, six hundred thousand square metres of valley, woods and meadow where I grew up doing anything I could dream of. My father Attilio – or Attila, as everyone calls him today – even had his own personal chapel built: a holy place dedicated to Saint Anthony that he later offered as a gift to Pope John Paul II who gladly accepted it.
Twenty years ago, my father discovered that he had powers that some may define as “paranormal”.
Today he is a dowser and a faith healer. He finds water for those who need it and there is always a queue of people waiting to be cured outside his house. So what do you think he decided to do? Well, he just cures people for free as he claims that his gift was given to him by Saint Anthony and should therefore benefit everyone.